Characteristics of wireless medium is divided into two parts:-

Radio Wave Propagation is the behavior of radio waves when the waves are transmitted or propagated as a form of electromagnetic into the various part of the atmosphere, or from one point on the earth to another. Like radio waves , light waves are effected by the phenomenon of 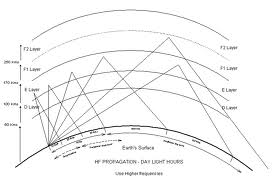 Radio propagation is effected by several factors like the daily changes of water vapor in Troposphere and ionization in the upper atmosphere and it is also effected by factors determined by its path from point to point.

Radio Wave propagate in different ways at different frequencies. The wavelength is very much larger than the separation between the earths surface and the D layer of the ionosphere at very low frequency and extra low frequency. So, the electromagnetic propagate as a wave guide. The wave propagate as single wave guide mode with a vertical electric field and horizontal magnetic field, for the frequencies below 20 kHz. Radio propagation becomes more complex when there is  interaction  of radio wave with ionized region of the atmosphere.

Since radio propagation is not fully predictable, such as some television broadcasting have been moved to communication satellites, communication with ocean-crossing aircraft in flight, and emergency locator transmitter.

By treating electromagnetic waves as travelling along localized ray path propagation within and even outside the building is described by using ray optical method. Three basic mechanism [RAP95, PAH95] are generally considered in order to describe radio propagation with ray optics.

Calculation of signal coverage is essential for design and deployment of both narrow band and wide band wireless network. It is influenced by a variety of factors; most prominently the radio frequency of operation and the terrain. Often the region where a wireless network is providing service spans a verity of terrain. An operation scenario is defined by a set of operation for which a variety of distances and environment exist between the transmitter and receiver, as a result a unique model channel model cannot describe radio propagation between the transmitter and receiver and we need several models for a variety of environment to enable system design. The core of the signal coverage calculation for any environment is a path loss model which relates the loss of signal strength to distance between two terminal. Using path loss model radio engineers calculate the coverage area of wireless base station and access point as well as maximum distance between two terminal in an ad hoc network. We consider path-loss model developed for several such environment that span different cell sizes and terrain in the cellular hierarchy used for deployment of  of wireless network.

Path loss models describe the signal attenuation between a transmit and receive antenna as a function of the propagation distance and other parameter.

2. What are the signal propagation characteristics??

There are three signal propagation characteristics

3. What are the different mode of radio wave propagation??

.4.Why can radio waves propagate through the wormhole but not light??

GET 50% DISCOUNT ON E-BOOK OF NOTES AT ONLINE KHANMARKET & 20 % ON STUDYMATERIAL.OUREDUCATION ON 1ST PURCHASE.