An ad hoc network must offer acceptable communication services. By giving the dynamics of the network topology and underlying protocols, it must yield good communication performance. 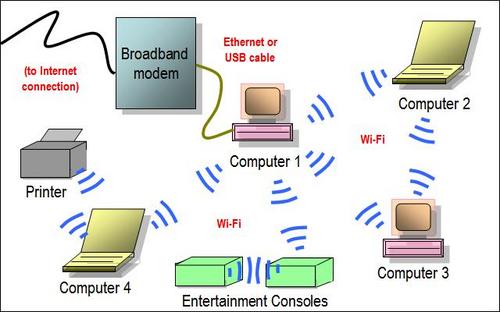 End-to-End Delay (EED) Performance:
The delay experienced by the packet from the time it was sent by the source till the time it was received at the destination is called end-to end delay. EED includes all delays from source to destination such as transmission delay, processing delay, propagation delay and queuing delay which is experienced at every node in the route. In order to measure the EED, using ping utility packets are sent from source to destination over different route lengths and beaconing intervals.

Communication Throughput Performance:
The useful data rate in bits per second (bps) is the communication throughput. TCP/IP based applications are being supported by ad hoc wireless networks and operation and performance of some applications can be affected by communication throughput. So, investigation of throughput performance for ad hoc wireless networks is essential. Throughput can be measured by sending data from source to destination using ping. The average throughput is the ratio between the total data received and the total delay incurred.

Packet Loss Performance:
The percentage of packet loss during 100 ping of data is packet loss. In ad hoc wireless networks, TCP performance is affected by packet losses. The main reasons for packet loss are node mobility and link layer congestion. A link failure on an active path due to mobility causes the MAC protocol to report a link failure to the routing layer. Then routing layer have to re-computed routes to the appropriate destinations.

With advances in wireless communications and wireless networking protocols, mobile computing is evolving rapidly. Devices are getting more small and efficient, but advances in battery technology have not reached the stage where computer can operate for longer time without recharging. Research is going on in this field. If there is an electrochemical limit, then advanced power consumption techniques are necessary.

Energy conservation is critical issue in ad hoc wireless network for the node and network life because the nodes are powered by batteries only. Each mobile node typically has a portable set with transmission and reception processing capabilities. In order to transmit a signal from one node to another, the power consumed by both the nodes consists of the following three parts-

i). the source node needs to consume some power to prepare the signal

ii). In the most common power-attenuation model, the power required to support the transmission between two nodes is dependent on their distance.

iii). When a node receives the signal then the node needs to consume some power to receive, to store and to process the signal.

Beaconing is a technique used to convey remaining power life information and also available service information. It is important element in the implementation of ad hoc wireless networks. Various works has been done to limit the power consumption of hardware devices in the system. Power management needs to be performed at various layers of OSI model i.e., data link layer, transport layer, network layer, and application layer.