ABOUT  ROCHE GROUP
Roche Group is a full member of the Europe member of Pharma Industry and associations ( EFPIA ) . The Roche Group  also owns the American Biotech company Genentech, which is wholly own  affiliate and the Japanese Biotech Company  Chugai Pharma as well as the Tucson, Arizona based Ventana . The Roche Group was early on known for producing various vitamin prep and derivatives.The company headquarters are located in Basel and company has many pharma and diagnose sites around the world.

Roche Group  has shares listed on the SIX SWISS EXCHANGE.

HISTORY
The Roche Group was  founded in 1896 by fritz hoffmann , the company was early on known for producing various vitamin prep and derivatives.

In 1934, it became the first company to mass-produce synthetic vitamin C , under the brand name Redoxon. In 1957 it introduced the class of tranqui  known as benzo (with valium and Rophy  being the best known members). Its acne  drug isotret , marketed as Acutane and Roaccutane, also used as a form of theraphy  for some cancers, has been linked to a number of severe side effects and remains highly controversial. Roche has also produced various HIV test  drugs. It bought the patents  for the polymerase chain reaction  technique in 1992. It manufactures and sells several cancer  drugs.

On 12 March 2009 Roche agreed to fully acquire Genentech , in which it had held a majority stake since 1990  after 8 months of negotiations. As a result of the Genentech acquisition, Roche closed its Palo Alto based research facilities and moved them to Nutley while the US Headquarters in Nutley was moved to Genentech’s facility in South San Francisco. Genentech became a wholly owned subsidiary  group of Roche on 25 March 2009.

Group sales rose 6% to 11.6 billion  Swiss francs as demand for Roche’s cancer medicines and clinical lab products grew strongly in the first three months of the year. Higher sales of Tamif due to a severe flu season in North America also supported Roche’s performance in the first quarter.Group sales were particularly dynamic in the United States and emerging markets, while strong demand for Avastin in ovarian cancer led to an increase in Pharma sales in Europe. The rise of the Swiss franc against the Japanese yen by 13 percentage points impacted Group sales in Swiss francs by 1 percentage point.

JOB HEAD PROCESS AND RESEARCH
The headquarters in Basel is one of Roche’s largest sites, over 8,000 people from approx 80 countries work at Roche Basel. Favored by its geographic location in the heart of Europe, the Basel area is one of the most dynamic economic regions in Switzerland — a great place to live and work.In this position you are responsible to develop robust and lean manufacturing processes for oral dosage forms (standard, drug delivery systems) for new chemical entities and the transfer to commercial manufacturing. You represent the department in technical development teams. 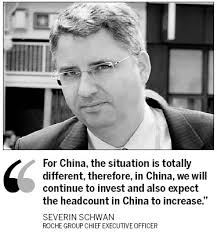 Viewers can also view our other post on placement criteria:–


Your views are valuable to us. Any type of suggestion will be highly appreciated.