THEORY OF THE FIRM

The ‘theory of firm’ has been developed on the basis of the assumption that rational firms pursue the objective of profit maximization, subject to the technical and market constraints.

The basic components of the theory of firm are as follows –

(i) Firm always proceeds towards the achievement of its goal, usually profit maximization.

(ii) Firm is a unit which transforms inputs into outputs of a higher value, given the state of technology.

(iii) Competition and monopoly markets affect the firm to great extent, so the market conditions are given to operate the firm in proper manner.

(iv) The  main function of the theory of the firm is to analyse changes in the prices and quantities of inputs and outputs.

(v) At the time of choosing of best alternative. The firm prefers the alternative which helps it to consistently achieve profit maximization. 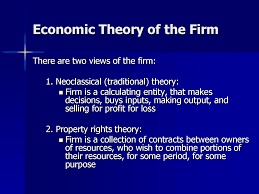 Following are the main assumptions of the theory of the firm –

(i) The firm has only one goal which proceed the direction of firm towards profit maximization.

(ii) The firm acts always to achieve its goal.

(iii) The firm is a single-ownership one. It means a firm is run by its owner, called the entrepreneur.

Model-profit maximization means the generation of great amount of profits in the time period given for analysis. There are two types of time periods; the short-run and the long-run. The short-run is the period where adjustments to changed conditions are only partial. For example, if the demand for the product for a firm increases, in the short-run, it can meet the increased demand through changes in man hours and proper use of existing machinery .The long-run is a period where adjustment to changed circumstances is complete. For example-if demand is increased then firm can meet the target by increasing production capacity or by setting up an additional plant and intensive use of its existing machinery. The long-run consists of much number of short-run periods. Under the assumption of independence of periods, the short-run and long-run profit maximizations are consistent or identical. While the assumption of period linkages, the profit. Maximization in the two periods may conflict. For example, a firm which dominates the market may decide to restrict supplies in order to change higher price to maximize profits. When higher profits are achieved in the short run may in the long-run induce workers to demand higher wages. Maximization of profits in the short-run may give an impression of being exploitative, thus inviting legal intervention which would affect long-run profits adversely. A firm trying to build up its reputation by charging low prices and supplying quality products in the short-run would be able to make long-run profits.  The Managerial theories may be broadly classified into three categories

(i) Bamoul’s Sales Revenue Maximizing Model- The duopolistic firms aim at maximizing their sales revenue. The main reasons for this are as follows –

(a) Health of a firm in terms of the rate of growth of its sales revenue is judged by the financial institutions.

(b) The salaries of the top management are correlated more closely with the firm’s sales that with its profits.

(c) Increasing of sales revenue over time provides prestige to the top management, profits go to the shareholders.

(d) As the sales increases, employees become happy by getting· higher salaries.

The main assumptions of the model are as follows­

(a) Goal of the firm is sales maximization.

(b) For a ‘firm, advertisement is a major instrument.

(c) Production costs are always independent of advertising. (d) Advertising will always result in creating favorable conditions for the product.

(e) Price of the product is always assumed as constant

Berle-Means-Galbraith Model of ‘Corporate Power Structure’ – According to Galbraith, the traditional view point of management of a corporation may be depicted in terms of the vertical corporate power structure where shareholders hold the ultimate power.

In large industrial organizations, the ownership and managerial control generally present in the hands of two separate sets of people – the shareholders and managerial team. Shareholders always hold the ultimate power. The decisions are passed downwards in the hierarchical structure of directors, middle level management, supervisory staff and workers. The power structure of modern corporations as suggested by Galbraith is given in fig. 4.6.

(b)   Professional corporate managers have no personal motivation to maximize profits

(iii) Growth Maximization Models – Rate of growth and potential of growth are used to measure corporate success. Growth of a firm must be financed either from retained earnings or from market borrowings or both. Internal funds grow only through profit-maximization.

Bamoul’s Model of Growth Maximization – Bamoul says that growth is needed to increase profitability. Always, the firm aim to find the optimal short-run growth rate that will contribute the most to long-run profitability. According to Bamoul, total cost rises faster than total revenue at higher rates of growth because –

(b)    Capital markets are imperfectly competitive.

The various behavioral theories see firm as it is engaged in non-maximizing behavior. According to behavioral theories, the firm’s sub-optimal behavior arises from uncertainty and conflicting goals of various groups within the Firm. The analysis of organization of the firm is done with the help of behavioral theories. It analyze the ways in which decisions are reached.

(i) Simon’s Satisficing Model- H.A. Simon gives an alternative model to the profit maximizing. Generally, the managers take decisions for future on the basis of incomplete information. The management determines a ‘satisfactory aspiration level’ on the basis of its past experience and judgment about future uncertainty. If we get aspiration level easily, then it is revised upwards for future operations while it remains unachieved then it is reviewed downwards. In both upwards as well as downwards revisions, the management indulges in ‘search behavior to find the reasons for the deviations from the aspiration level. This model helps in explaining certain real-world situations.

(ii) Cyert and March’s Behavioral Theory of the Firm – This theory is based on the internal structure of the firm and tries to analyze the organizational problems and the effects of these problems on the decision making process. This behavioral theory considers the firm as a multi-goal, multi-decision, organizational coalition. Coalition consists of the various groups associated with the firm-workers, managers, customers, shareholders, suppliers, accountants, bankers and so on. Each group has their different goals and demands.

Questions which can come:-

Q.2) Classify the managerial theories of firm and discuss each in brief?

Q.3)  Describe the various behavioral theories of the firm?

About the Author: poorva gupta

2 Responses to THEORY OF THE FIRM