Buna-N is a commonly used elastomer. Buna-N is also known as Nitrile rubber, NBR or Perbunan.It is synthetic rubber copolymer of acrylonitrile(ACN) and butadiene. Elastomer is natural or synthetic material which does not break when stretched and when released it return to its original length. Acrylonitrile monomer used to prepare Buna-N gives hardness,tensile strength and abrasion,fuel and oil resistance.It usually contain 34% ACN. By reducing ACN  content low temperature properties improves but high temperature properties  reduces,material swell increases and fluid resistance decreases. Butadiene monomer used to make Buna-N gives elasticity and low temperature flexibility. Buna N – Properties and Uses are given below :

Buna-N is resistant to oil,fuel and other chemicals means more Buna-N higher the resistance to oil but flexibility of the material is less.It is resistant to aliphatic hydrocarbons.It has tensile strength of >=10N/mm2 as well as excellent abrasion and compression set resistance.Elongation of Buna-N after fracture is >=300%.It is not resistant to solvents.It can be attacked by ozone,ketones,esters and aldehydes. It have poor resistance to ozone,sunlight and weathering as the double bond present in the polybutadiene segment of the chemical backbone. So,Buna-N should not be stored near ozone generating electric motors,welding equipment or in UV light.Buna-N performs good in petroleum oils and fuels,silicone oils and greases,ethylene glycol,dilute acids and water below 212 degree fahrenhite. On the other hand,it does not perform good in aromatic hydrocarbons,halogen derivatives, ketones, strong acids and phosphate ester hydraulic fluids. The general properties of Buna-N are not altered by minor structural or compositional differences.

Buna-N is used in the automotive and aeronautical industry to make fuel and oil handling hoses,seals and grommets.It is is used to make protective gloves in the nuclear industry.It is ideal material for aeronautical application as Buna-N can withstand a range of temperature from -40 to 108 degree C.It is useful material for disposable lab,cleaning and examination gloves. Buna-N latex is used in the preparation of adhesives and as a pigment binder. XNBR,an improved version of Buna-N,is used for hoses,rubber belts,sealing parts,special purpose article in oil well,reciprocating oil seal,rubber seal,gaskets,roll covers,shoe soles,varieties  molded part for shoe heels and O-rings. XNBR is specially used for modification of the adhesives and epoxy resin. 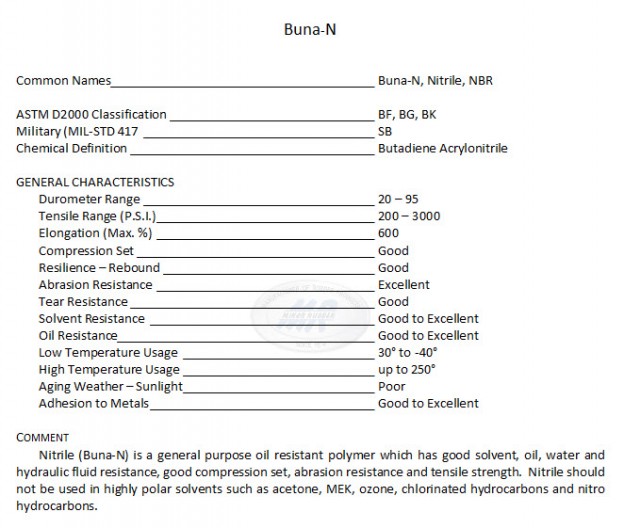 Ans.-Elastomer is natural or synthetic material which does not break when stretched 100% and return to its original length when released.

Ans.-Monomers which are used to prepare Buna-N are as follows-

Ans.-Buna-N have poor resistance to ozone,sunlight and weathering because double bond present in polybutadiene segment of the chemical backbone.

Q4.Why Buna-N is used as ideal material for aeronautical applications?

Ans.-Since Buna-N can withstand a range of temperature that is from -40 to 108 degree C.So, it is ideal material for aeronautical application.