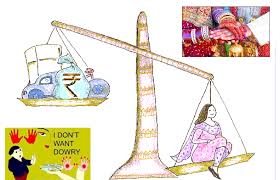 People believe that girls bring prosperity and money through their foot prints. Our culture gives highest position to women.

A girl’s father treats her daughter like an angel, he takes care of her, educates her, provides her all vital facilities. He gives all sort of luxuries that is given to a boy. Even though he knows that one fine day she would be leaving. After doing all this girl’s father is asked to give Dowry at time of marriage. It means any property or valuable security given or agreed to be given either directly or indirectly. Is this fair enough??  I don’t think so. Why should girl’s family need to pay heavily, even they are giving their most precious thing to them. I don’t understand when the boy is capable of marring that means he is capable enough that he can feed the girl than why he need money. If a family asks for dowry than that particular family must be made abandon from society. No one should marry the boy of that family. If this thing persists than no one would asks for dowry. We believe that education is a answer to all such problems. But let me just clarify, Dowry is been asked by people who are well qualified enough. These are some latest complaints against dowry: 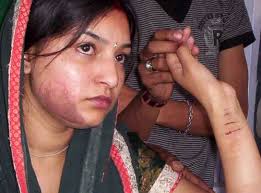 Man, along with father and grandmother, allegedly set mother on fire Monday January 21, 2013

In the past times this money was given as a gift to their child. It was given to them by the consent of parents with their happiness. But this trend now is used in other way. Now, the people force parents to give money which is a burden to them.

If a girl is highly educated and works well, then also these greedy people ask for a large sum of money. In today’s world education and employment have the highest priority. One who has both of these things has everything needed to survive in this modern world with full of luxuries. Then why people need the money??

I think people should change their mentality. They should treat a girl not as a lottery to them but either as their own child.  They should understand that, a girl has to leave the place where she is born and brought up. She leaves her house to live with a family which is not known to her. She has to adjust with them, feel them, and take care of them. She takes all such pain and in return she should also be given lot of love, care and happiness. She should not feel that she is away from her house. She must be given lot of respect and should live her life with dignity.

About the Author: Shreya gupta