The future lies with glocalisation .

Glocalization is business term for the adaptation of a product or service specifically to each locality or culture in which it is sold. It is similar to internationalization. Glocalization serves as a means of combining the idea of globalization with that of local considerations.In other words it is the integration of the global market with the local market.For example The increasing presence of McDonald’s restaurants worldwide is an example of globalization, while the restaurant chain’s menu changes in an attempt to appeal to local palates are an example of glocalization
Many developing countries are both integrating with the world economy and devolving power to local governments and communities. This combination of globalization and localization is best called glocalization. The centralized nation-state is giving way to both supra-national and sub-national institutions. 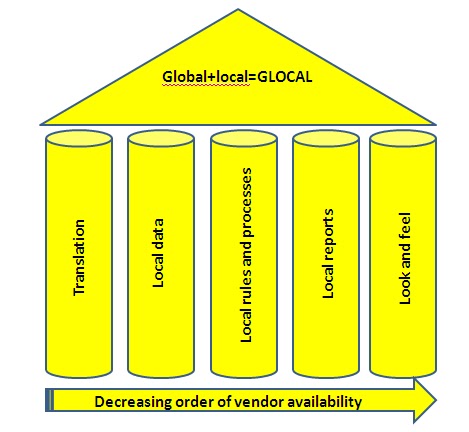 Underlying both trends is a single force: the empowerment of individuals and communities at the expense of the monolithic nation state. Glocalization improves the voice, participation and prosperity of individuals and communities. It is an idea whose time has come.
In an article for Bloomberg Business week, the two highlight the drawbacks of a system that allows for the flow of innovation in only one direction: from the headquarters of multinational corporations out into the world. Especially in the developing world, this results in the modification of the same basic products made for the developed world to prepare them for poor-world consumption through de-featuring and substitution. As an Indian businessman explains, this is a poor model to follow in that individuals in the developing world no longer want such modified products of the rich world, but rather desire “rich world quality in their own products.”
With the increasing glocalization we are making the local market available for global control. Local community are sometimes are not satisfied with global orientation of product and services. sometimes, it is an essential thing that local requirements are taken care rather of global standards. therefore too much integration with the global market may lead to the problems with local community. Glocalization is neccessary to some extent because it presents a potential response meant to offer protection against the more negative effects of globalization.

About the Author: saarika Singh

I am an Educationist at oureducation.in. I have overall 6 years of experience in the Education Industry. I guide people for the choice of thr Right Career Path as per their Interests. I write many articles, blogs to make people aware of any kind of education they are looking For.

« Who says MNCs are superior to Indian companies ? The Manifestos wheel is turning round and round »